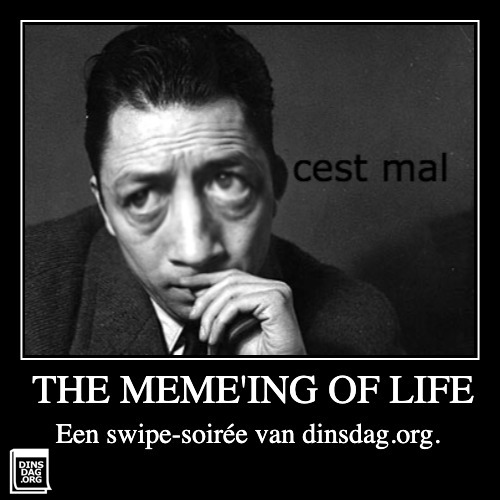 THE MEMEING OF LIFE

Does a Streaming of life.

Or a life stream.

How it will unfold to you

Or swipe back and forth

through the deepest caverns

past the darkest rooms

to the highest heights

Jeff and Bas or Bas and Jeff together form Dinsdag.org. A nomadic organization theatrically committed to sensible nonsense in a society. It is managed horizontally and is loose-fixed in its members and are all fond of blue cheese.

Jeff Aendenboom is an Actor, Playwright and Writer. He received his Master’s degree in Drama/Acting from the RITCS school of arts in Brussels in 2018.During his studies, he was selected for TAZ young work 2017 with the monologue K. After graduation, he won the professional jury prize at the Café theater festival utrecht 2019 with his performance ‘God will (not) save us’ which is still touring in Belgium. Shortly after, he won first prize in the preliminary round of the Write Now 2019 writing competition in Leuven with his text ‘Millennial Mythology’. And He made another performance with Naomi Van der horst for the Fringefestival in Amsterdam called Koninginpuinhoop.

Bas Vanderschoot received his master’s degree in acting from the RITCS in Brussels in 2019. With the promise of Clermont-Ferrand he was at TAZ in 2016. After his graduation he played at Hof Van Eede with “The Big Drop Out”. He also played at K.A.K. (The Koekelberg Alliance for Tinkers) with Life, Death and television. In addition, he is also a musician. As founder and tubist of Fanfaar Fatal based in Antwerp.