Tune in at Untitled_2021, a digital live constructed performance. By rendering a story about interconnectivity, Nineties creates a fictional story based on the not so fictional situation that our world is currently in. How to deal with inevitable damage?

Inspired by the words of Donna Haraway, Nineties calls into being the work of a woman named George Wells, a feminist biologist that wrote the book Untitled. A long forgotten manifesto in which she sketches her ideas about unprecedented bonds between nature and culture, animals and humans, organic and artificial matter. George playfully described a worldview that gives ‘being part of’ a whole other meaning.

Untitled_2021 will be presented during Oerol [June 15th – June 19th] and Over Het IJ festival [DATA], only to be experienced online with your webcam on.

The virtual world in which Untitled_2021 is presented, is meant to be experienced individually on a computer using headphones. The Lab is built with Ohyay.co, which is developed for web browser Chrome. Therefor you might experience problems when using other browsers. Please allow permission to use your webcam and microphone when prompted, without we can’t guarantee a full experience.

“Theatre with our screens as a stage offers many opportunities and possibilities, and also promises much for the future beyond corona. We can create intimacy with audiences from Japan, Chile or Tunisia. Through video calls we can break through the fourth wall, directly address the audience and really experience a moment together unlike film or Youtube Live. By making sets digital and using different cameras, the visual possibilities are suddenly endless. It’s as if in a theater you can not only build any scenery you want, but also play with the eyes of your audience. And meanwhile, just like a concert or a performance, you feel that it’s all happening where you are. Or well sort of where you are” 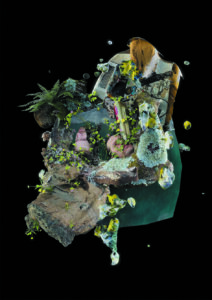